The Vikings are now protected against the snow

January 14, 2013
There is a Viking long ship with four Vikings on the river in Andover. They are there to commemorate the  founding of Andover by Vikings in 950 AD, when a Viking King built a hunting lodge at the site.  Another Viking connection is that King Olaf was baptised a Christian in Andover.  He later took Christianity back to Norway.  See here for a little more detail about Andover and it's Viking roots
http://en.wikipedia.org/wiki/Andover,_Hampshire#Early_history.

I've always loved the statues (erected to celebrate the Test Valley in Bloom Millennium Celebrations), with their Noggin the Nog faces and their bright colours.  So when we Spitfire Knitters planned our next bout of anarchy they seemed like the logical target.  Besides, we were concerned that they would freeze in the coming snow.  So we made them woolly hats and scarves. 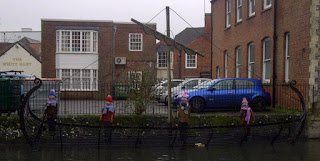 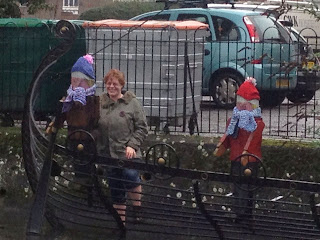 The only problem is, they are too far away from the bank to get to them.  So I had to wade through the river, in January, in the rain.  Totally worth it though.
We had one hat and scarf to many (I thought there was a dragon prow needing a hat and scarf but it turns out there isn't) so we gave the spare to this fine chap. 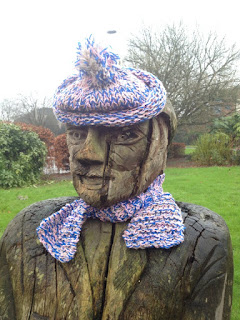