January 01, 2013
We spent a fabulous day riding up and down on vintage buses in Winchester today http://s262662507.websitehome.co.uk/page63.html.  We were accompanied by my Uncle Simon, who is a bus enthusiast, which meant we got all sorts of fascinating history about the buses and the companies that ran them.  We parked at St Catherine's park and ride and caught a free vintage bus into town.  Alex got his feet soaked (as usual when going near any water of any sort) so I bought him some new socks, then we met Simon on the Town Hall steps.  We ate lunch at subway (which always feels like slumming but tastes divine.)  Our first proper bus was a 1935 Paris bus. 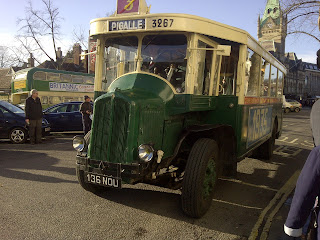 Just think, I might have been sitting in the same seat as a member of the French resistance.  The smell was fabulous, diesel and dust.  The Paris bus took us for a ride around Winchester, mainly through housing estates.  After stopping for the nicest hot chocolate I've had in years (from '1871', cafe attached to the Town hall) the next bus took us out of town to Sutton Scotney.  It was a built in 1970 so still older than me. 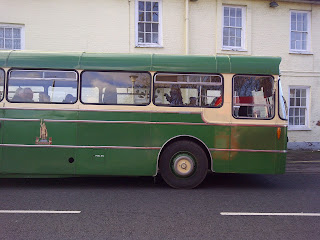 We came back on this one. 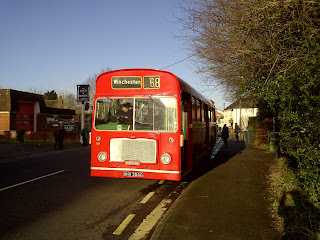 I wanted to travel on a double decker so we took the No. 6 up to Morn hill and back.  By this time it was getting late so we decided to head back to the park and ride.
On an open top bus. 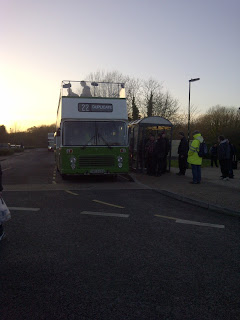 Which I've never ridden in.
Best ride of the day by far.
Alex and I loved it, and I was sorely tempted to ride up and down until my mouth froze shut.  I think Alex's face says it all. 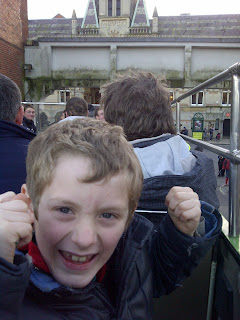 Thank you to Friends of King Alfred Buses for putting on a fantastic day, all for free.  Thank you as well to Uncle Simon for all the information and for putting us in the right place at the right time.  Roll on next year.